Eroding resistance between me and the mountains; occupying my mind with the passage of the wind; leaving my humanity hanging on the trailhead sign and becoming nothing other than the movement of my limbs, the sound of my breath and the patter of my feet. What the previous weeks have lacked in gnarly sufferfests, they have made up for with lots of hard breathing, sunburns, slogging, scrambling and loving life. While I feel the need for a “big day” soon (i.e. <3000m of vert), I can’t be upset with where my current level of tan — I mean, fitness — is at. Running up to 40km and climbing 2500m has become almost mundane and I feel myself transforming into some sort of mountain ungulate, channeling the spirit of my inner chamois. Hopefully the coming weeks see a couple massive days before I fly to Ontario and then taper for my petite jog around Chamonix the week after that. 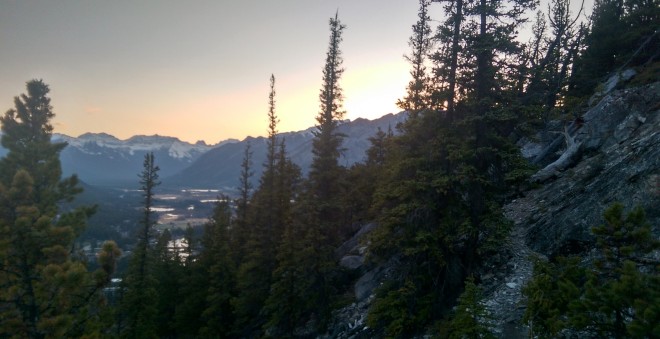 05/11/15 – Tunnel x 2 – 38m58s/7km/320m | 1h07m/7.5km/320m
Up and down Tunnel from my house and back, twice. First lap fast, second lap casual. Ate a ton of yummy Singapore egg noodles right before running and it felt like I was going to poop my pants the entire time. Also, I wore my bald New Balance 1400s, which is a pretty novel concept for me, but they were really comfy and enjoyable. The first lap was a PB to the summit and back (21m to summit, 38m home), which was the objective, to push hard anaerobically and beat my previous time. I got home in such egg noodle-induced misery that I said one lap was enough, but after literally a minute or two I decided I was game for a second outing. So I switched my shirt, trotted across town, got my ass back up the mountain, took a bunch of pics (the sunset now even more sunsetty and alpenglowy than the first time), then descended yet again in diminishing light. It seemed the egg noodle demon burrowed its way even deeper into my gut and the run from the lower parking area/trailhead to home was downright painful. Fast and very pretty but uncomfortable. 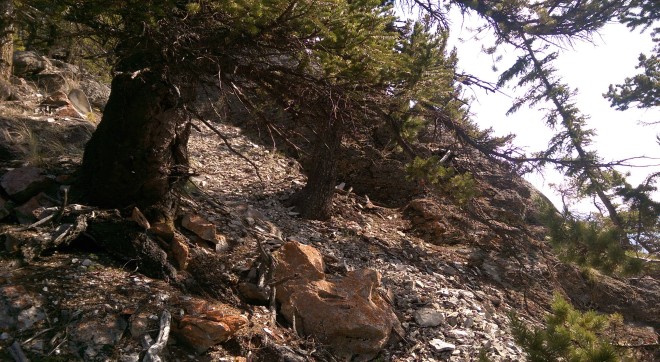 13/05/15 – Tunnel – 50m33s/5.5km/368m
From home, ran up the SW shoulder to the summit, then down some goatpath on the north of the mountain which I intended to take me more directly down its north ridge to Tunnel Mountain Drive but took me pretty much staight down from the saddle to the first switchback of the main trail. Okay, I’ll take it. Great running on the approach along the exposed (literally — you trip, you die) singletrack paralleling Buffalo Street going up to the Banff Centre, with 100m of sheer drop to the whitewater of the Bow River below on your right. This is trail I used to run often when I worked at the Banff Centre which definitely forces you to concentrate on your footing. I caught the SW goatpath up Tunnel and jogged much of it, then slogged sweatily to the top. Tagged the top then pleasantly got lost on the descent and pretty much skiied scree down to the start of the main trail, where I burst out of the bushes half-clothed amid a gang of elderly, picture-taking tourists. Bombed the trail back to town and retrieved passport pics in preparation for going to EUROPEEEEEEEEE.

14/05/15 – Sulphur Double-Crossing – 4h47m/~35km/1900m
Big Sulphur “tick-tock”: From home, ran up the back, tagged Sanson’s, descended the front to the confluence of the Bow and Spray Rivers (i.e. Bow Falls) then ran back up the front to Sanson’s and down the back of the mountain to my apartment. It was pretty poor weather outside so it was easy to stick close to home today. This is the sorta thing (LSD) I said I wouldn’t do again any time soon but today’s run served the specific purpose of instilling streamlinedness to my longer efforts; to focus single-mindedly on forward/upward travel until I hit the summit, then taking a few seconds to recover mentally and dropping like a stone back down, whilst trying to utilize the descent to continue to experience some degree of recovery. Hit the bottom; recover quick; then back up again. It’s easy on big hill repeats (CCC for example) to waste minutes amounting to hours during breaks at the top or bottom relishing the comforts of not moving. I’m specifically trying to break the desire to lollygag, procrastinate, linger, take pictures, eat more than I have to, screw around in my backpack, sit on a rock with my head in my hands questioning life, or the desire to simply curl up on the ground and go to sleep indefinitely, and just get on with it.

Today’s run featured a few near-mystical moments on both the uphill and downhill, literally losing consciousness of “myself” and becoming only my experience of the wind passing my body, the sound of my feet hitting the ground or my hands occasionally gliding into my visual space. Thoughts like, “Tom’s tired” or “Tom’s thirsty” would bring me back to the reality of burning muscles, hard breathing, sweat and fatigue. 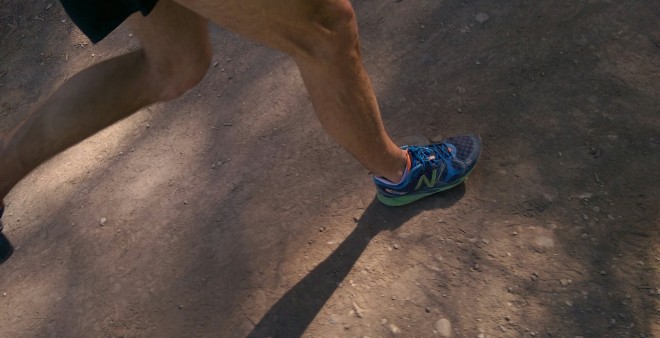 15/05/15 – Tunnel – 37m/7km/320m
Up and down Tunnel from home in bald 1400s. Aiming to break my previous PR, which I matched on the ascent to the specific second (21m30s). Meant to turn right around and freefall back to town (even though I was dying) but got caught chatting and taking pictures for some girl on the summit visiting Banff. The backside of Tunnel Mountain is closed right now due to a grizzly munching on an elk carcass, prohibiting me from doing a loop around the back of the mountain, if I wanted to do that sort of thing. Today’s objective was simply up and down, as fast as possible. I flew back down to town and sprinted to my apartment in a definite round-trip PR in 37m30s. 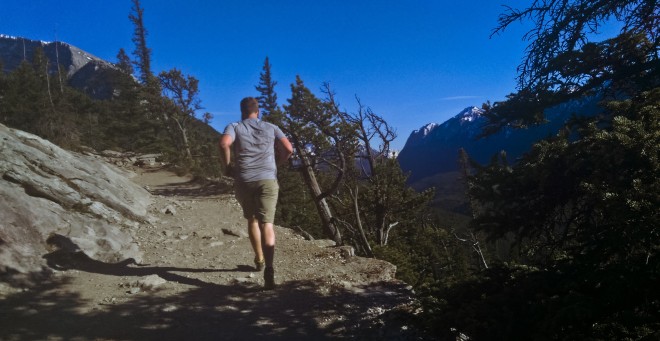 18/05/15 – Tunnel – ~1hr/7km/320m
Up and down the main trail with my buddy Matt Wade, who used to live and work at the climbing gym in Banff but now lives in Saskatoon — boggles the mind, I know, but soon (10+ years) he’ll be a brain surgeon. At any rate, I jogged up to the Banff Centre to meet him, then we powerhiked to the top and descended quickly back down. I did a bunch of cool runs with him in the summer of 2013, namely the Cory-Edith Loop with a scramble up the north peak of Edith. I think he’s trying to make it out to Golden Ultra in September, hence trying to get more vert in his running diet. 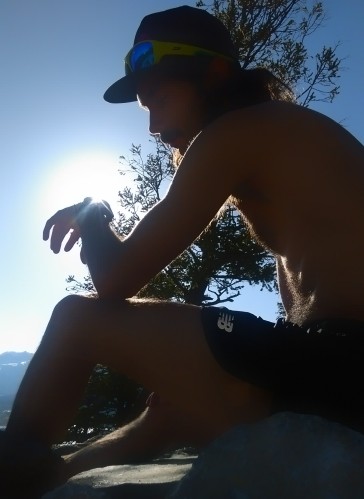 19/05/15 – Tunnel x3 – 1h56m/14.5km/857m
I’m not sure why I thought this would be a good idea, but proved to be a banal but pleasant evening accumulating vert on a tiny mountain. I reasoned that I needed to work on repeats, specifically getting used to the feeling of climbing after descending. I can slog 2000 vertical metres in one go, no problem. But break that into 500m ascent/descent repeats and guaranteed my legs are gonna feel extra pooched on the final laps — the difficulty seems improportinate. Three 300m repeats on Tunnel doesn’t really make a dent, sad to say. I set out feeling stiff and my knee felt wonky and I was doubtful about the practicality of the outing. By the end, having slogged and descended 900m, I said to myself that I simply felt “normal”, i.e. no longer stiff, but warmed up and a little fatigued. You know, “normal”. This run didn’t push my limits in any way but served up 900m of vert without detriment on a pretty night. Plus it provided heaps of comic relief/bewilderment for other people hiking up the mountain as they watched me whiz back and forth. Probably won’t be doing this again :S 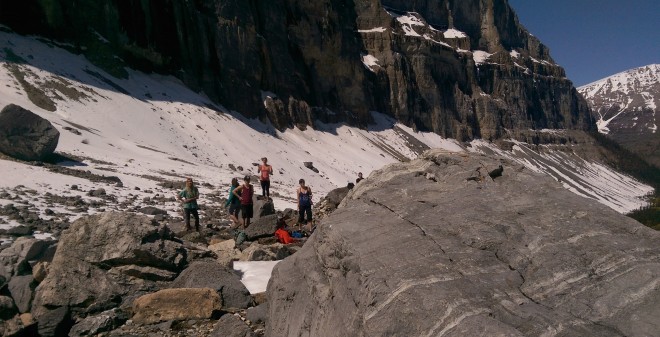 20/05/15 – Birthday Hike: Stanley Glacier – 3h25m/12km/401m
A heartwarming birthday hike (for me!) with peeps from work. I can’t remember the last time this many of us got together outside of work, besides maybe once or twice in the bar… We hiked up to Stanley Glacier viewpoint. Highlights include rockfall hitting and exploding chunks ice and snow off the headwall (!!!); big, wet cliffs and wispy waterfalls; sunburns; amazing views of sunbaked spring snow coating big alpine pinnacles; lots of jokes and laughter and lotsa mud on the way out. A stellar summery day doing easy hiking with friends in a beautiful mountain location. 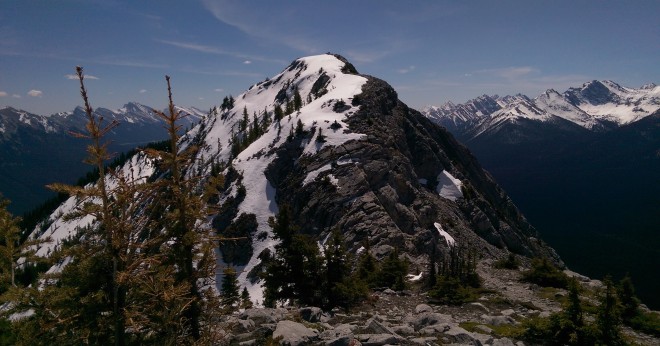 21/05/15 – Sulphur Traverse – 6h13m/30km/1946m
I’ve been waiting for this for awhile, for the ridge linking Sulphur’s boring “tourist” summits with its more scrambly, rarely-explored western ones to thaw free of snow. There was never enough snow to ski beyond the gondi station this winter, and post-holing isn’t my style, so I’ve waited till now for my go-to, backyard mountain to become a little more interesting.

Today was a day I desperately needed: to be out getting sunburnt, with my hands gripping talus and the wind in my hair. Personally I’d grown irritable seeing all the snow melting off the surrounding peaks and not foreseeing a chance to get out and bag something, until the opportunity arose and I seized it.

I headed out and jogged up Mountain Ave. towards the trailhead to get to the mountain and into the alpine as fast as possible today. Jogged and slogged to the top, refilled my water, then immediately sprinted out towards Sulphur’s next summit to the south (S3). I got there in quick time (1h30m), then tagged the next summit, and the next one (highest point, 2476m), the only variations being the scrambling on each and routefinding through the trees on the saddles between each peak. I hit S4 in 2h30m then proceeded to the next by 3h10m. Took a bunch of pics then headed back in lollygagging, stopping-to-take-pictures-of-everything-again fashion until my phone died. Hit Sulphur’s upper gondola summit at 5h22m, a little put-off by the noise of chattering tourists while having just spent a few  hours listening to the wind and sound of my shoes crunching scree. And Thee Oh Sees, at times. Tagged Sanson’s, then bombed down the fireroad without stopping, arriving at the Sundance Canyon junction in just over twenty minutes. I clicked off the final flat run to my place at a decent pace despite feeling pretty beat up — deliciously so. An awesome route on a mountain literally in my backyard, with lots of quality third-class scrambling and talus-scampering. Booyah. 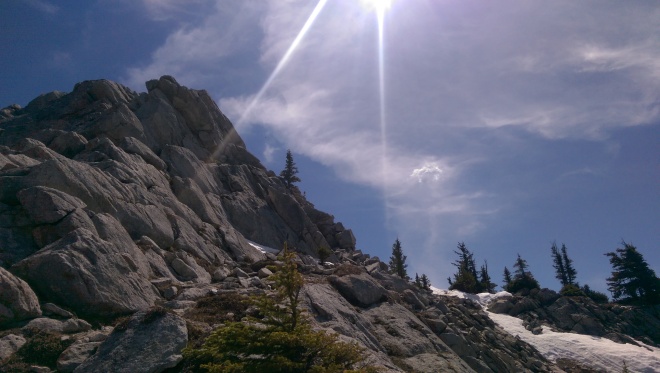 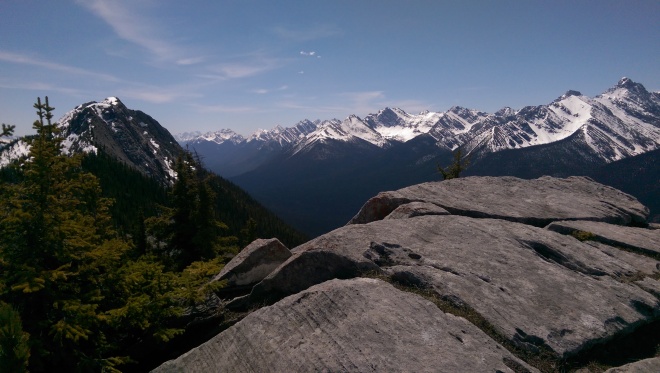 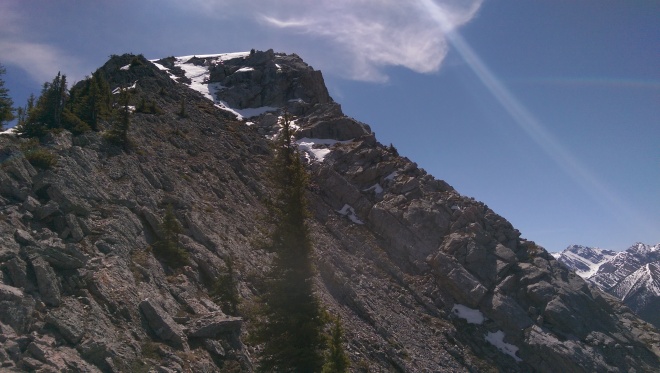 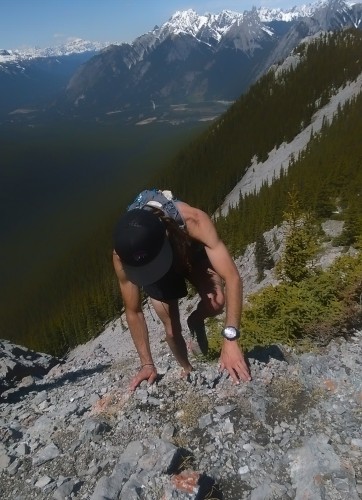 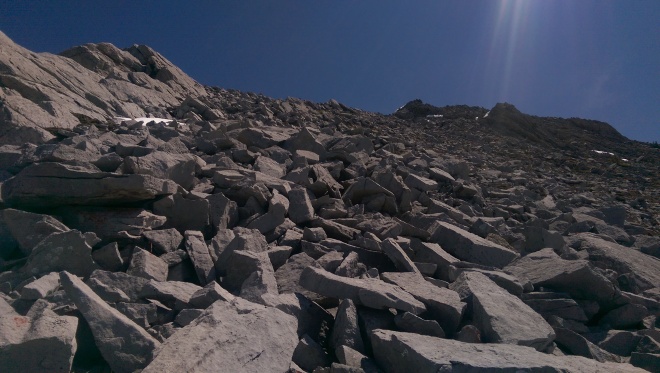 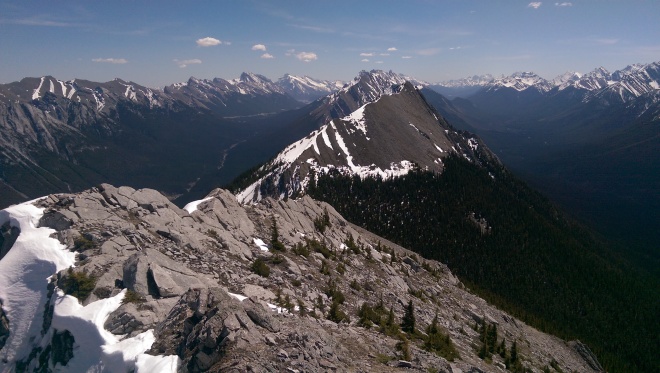 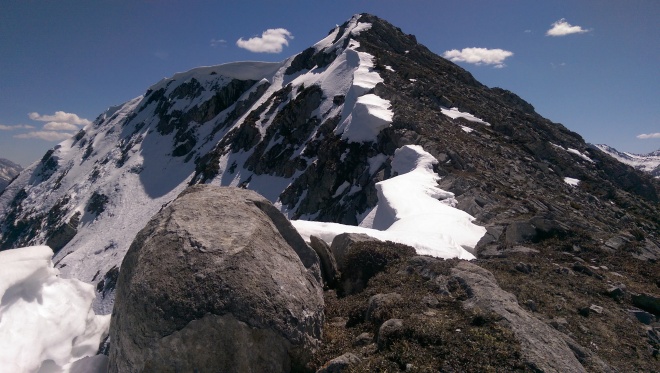 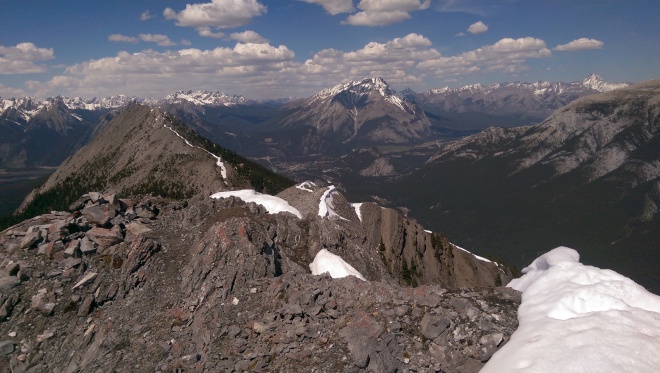 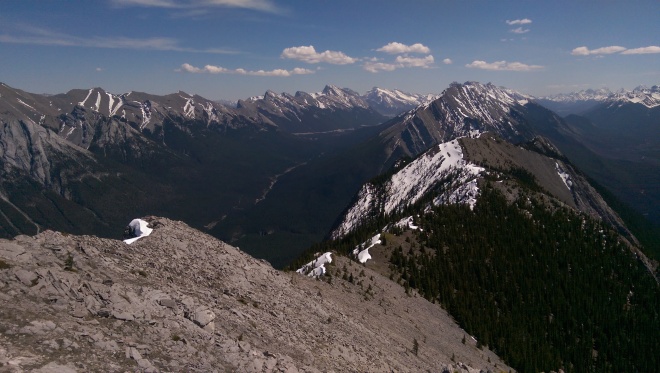 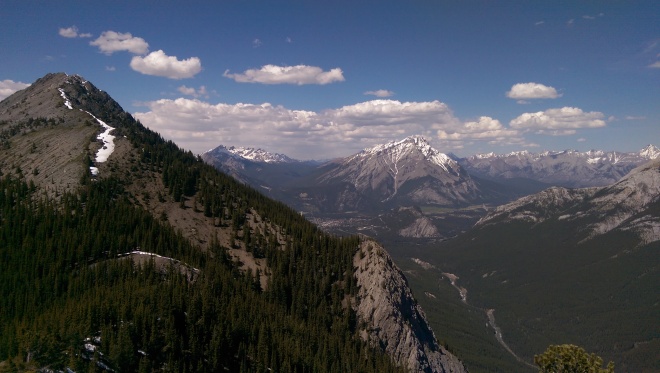 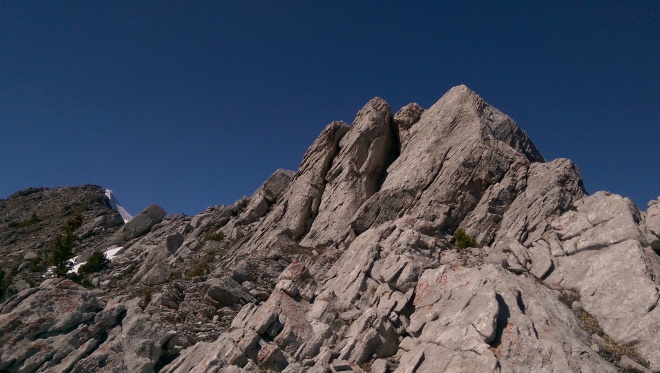 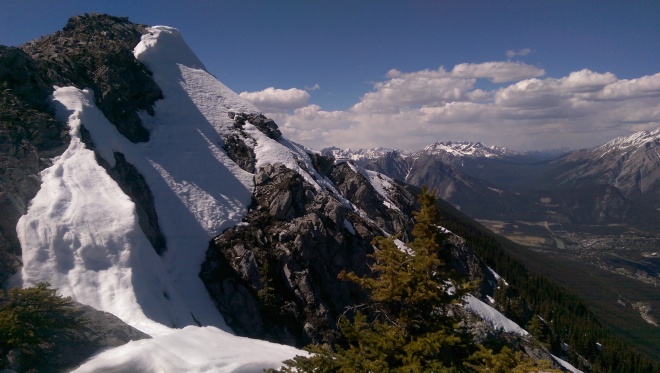 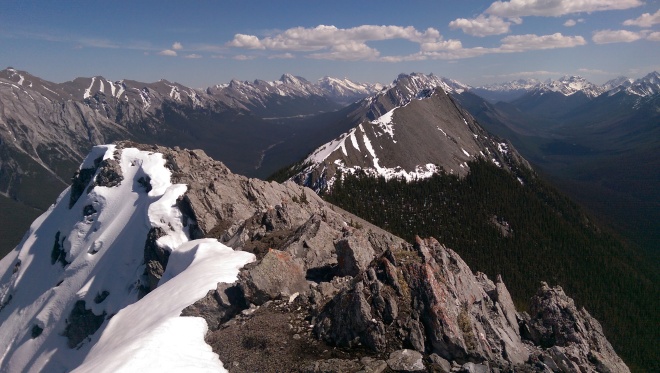 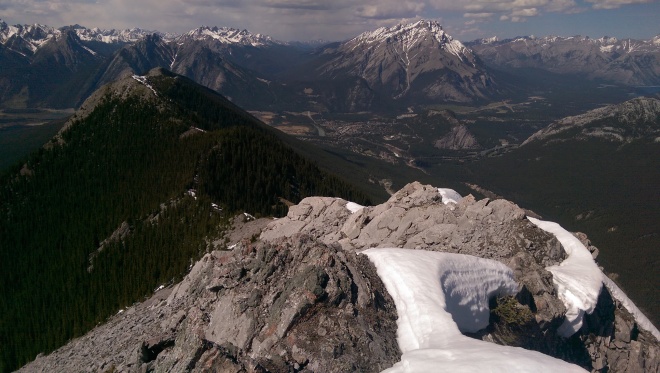 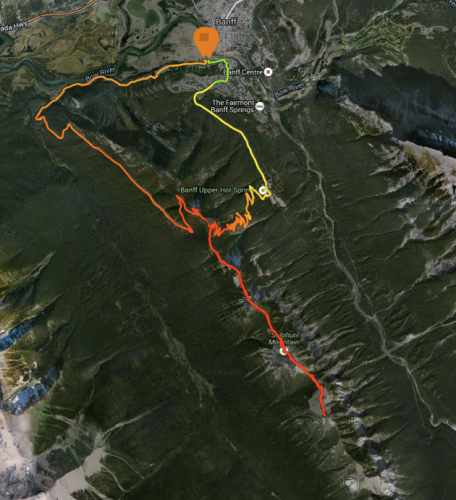 22/05/15 – Heart – 1h24m/6km/760m
Up and down Heart Mountain fast to christen new running toys with blood, sweat and scree dust. I had to drive to Calgary to do passport stuff and stopped at The Tech Shop on 4th Ave on my way out of town. Running-specific shops are hard enough to come by, but ones carrying the kind of stuff that caters to finicky ultra/trail runners is an even less common find. I picked me up a pair of New Balance MT110s (the original version!) — a coveted trail sneaker I wore frequently in 2013 but have had difficulty finding since then — and a Salomon Sense 1L vest. These items will hopefully support me through summer 2015 and get me through the race in Chamonix next month.

I tried to pick a peak close to the highway that I could summit in the quickest time possible and Heart is like a forty-degree ramp of scree-covered slab rising into the sky. The ascent was a sweltering march hands-on-thighs, sweat pouring off my face, while the descent was loose, slidy and hardly in control. Scree-on-slab = the most treacherous type of terrain. My footing in the new 110s was spot-on although my legs were trashed from bombing down the Sulphur fireroad the day previous.