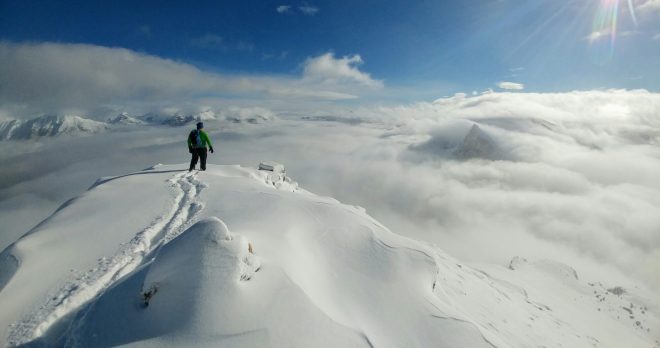 After a year spent wrestling with a handful (footful?) of injuries, I’m elated to be moving in the mountains again consistently, racking up vert with frostbitten extremities, just like normal.

Based on the potential I saw in 2015, I expected 2016 to be my peak as a trail runner but it was largely spent doing a bunch of other activities like riding my bike and swimming in frigid bodies of water instead.

That isn’t to say I’m disappointed with last year at all: despite persistent biomechanical issues, I trekked hut-to-hut in the Dolomites and ran a 20km skyrace; Glenn, Tyler and I tagged Athabasca; I rode my bike to Lake Louise, climbed Temple, then rode back to Banff; and also biked, swam and ran to the top of Mount Aylmer with a couple of friends.

2016 was the year I really diversified my movement in the mountains and learned to value what I’ve got. 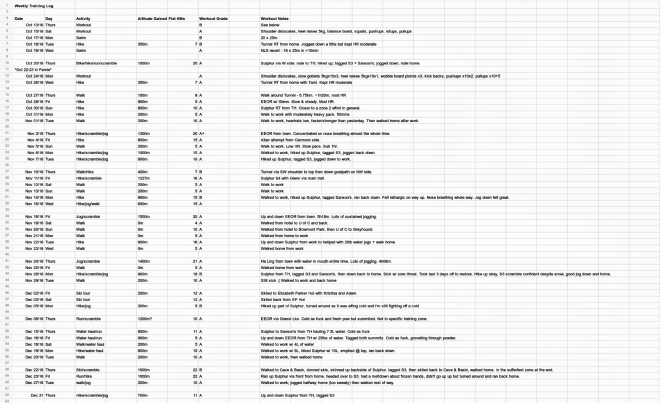 I’d normally take a break from running and bagging peaks this time of year, but since gaining an, er, foothold on my foot problem, I’ve tried to get out as much as possible to make up for what’s felt like a relatively inactive year.

I now find myself the fittest I’ve been all year, during what would otherwise be little more than “shoulder season”.

Where have I been? Mostly Sulphur, trying to tag the scrambly peak SE of the helipad (S3) in increasingly wintry conditions; and EEOR, hauling jugs of water up a thousand meters of snowy scree in an effort to simulate my next adventure.

Sometime last summer — just before going to the Dolomites, or maybe after getting back — I was sitting around thinking about my life and said,

“The only thing I’m good at is going on adventures.”

That is to say, the thing that comes naturally, if left to my own devices, is to research a place meticulously until I’ve developed a mental picture; scrupulously assemble the gear needed for the adventure, leaving behind anything I don’t; arm myself with any special skills needed for the challenge; then going off and doing it.

This has been my general M.O. for the five years I’ve lived in the Canadian Rockies and is same formula I’ve started applying in traveling to mountain locations elsewhere.

Most recently my goals have shifted from trail racing to mountain adventures at high altitude.

I developed an infatuation with altitude while trying to set a fastest time on Mount Temple in 2013. I remember slogging into the cobalt blue as my muscles seared, starving for oxygen. At the same time, I found myself relishing the sensation, discovering pleasure deep within the pain.

The feelings flooded back to me this past summer when I rode my bike to Moraine Lake and hiked up Temple, basking in the “tranquility and power that permeates the alpine zone at 11,000 feet.” Around here, however, 4000m is as high as you can get and any route on Mount Robson is well beyond my abilities as a mountaineer at present. 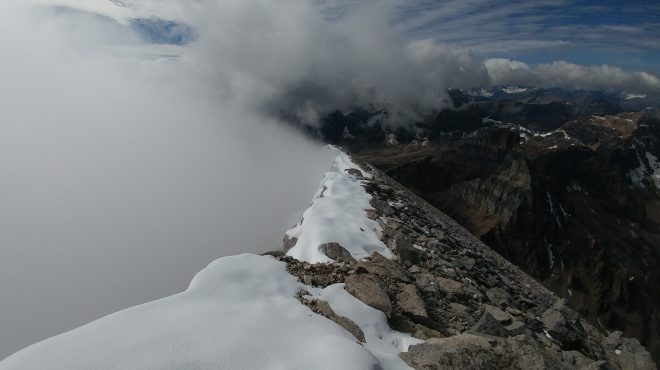 Fortunately there are five and six thousand meter high piles of scree elsewhere in the world and I intend to climb them!

My first exposure to the volcanoes of Mexico was via Aleister Crowley, whose writings I devoured as a young adult. Crowley trained in Mexico for an attempt on Kangchenjunga, and this account I remember reading while living in suburban Toronto. I remember desperately wanting the experience of climbing mountains but not knowing how I would ever even get to the mountains in the first place.

Ten years later, and traveling to Mexico has become the logical next step for me, just as it is for dozens of (especially American) mountaineers who make the pilgrimage down south for their first dose of thin 5000m oxygen.

Just as the Rockies prepared me for forays in the Alps, forays in the Alps have helped prepare me for this. I see the mountains of Mexico as the first step in a series of goals that has the potential to occupy me (my winters, anyway) for the next few years.