This week saw a return to running comfortably again as well as slogging some big vert after avoiding that specific activity for the past couple weeks. This week was fun and the warm, summer-like temperatures made the notion of getting outside pretty seductive. The latter part of my last long run reintroduced me to the delectably miserable side of ultrarunning. Me and it should get together more often; it’s been too long. Weekly total: 53km/3440m.

04/20/15 – Tunnel – 51min/7km/340m
Up and down Tunnel from home after work. Summer weather. Felt strong on my uphills though a perceptible tightness in my left knee. Leaning into the first hills after crossing the bridge felt delicious and brought a smile to my face. Spent a few minutes taking pics at the top then descended with usual reckless abandon. Good to feel “back”. Considered doing a loop around Tunnel but as I’d brought no water and was already sweaty and parched, decided to run home. 27 mins to summit; 24 mins home.

04/21/15 – Tunnel x2 – 9km/500m? (watch wasn’t charged)
Another glorious summer day in April. Powerhiked Tunnel with Glenn, descended fast to lower trailhead, then parted ways and ran back up fairly quickly. Spent zero time at the summit, simply tagged the top and descended again in freefall mode knowing the descent would be interesting because I was out of breath and tired. Ran back down most of the trail until I caught up with my buddy Bre-dog and her friend and I strolled with them back to the lower trailhead. Fast splits on my second run. A bit of tightness across my left knee but more of a superficial sensation and unlike what I was dealing with a couple weeks ago. 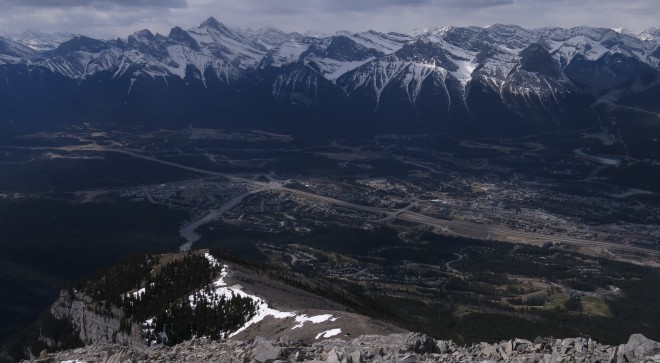 04/23/15 – Lady Mac + Ha Ling – 6h13m/37km/2613m
A long day out, very tiring. Did a “rim to rim” of Canmore, parking my car at Elevation Place then running up Lady Mac on one side of the valley, then Ha Ling on the other. The ascent of Lady Mac was pretty strong and streamlined given I haven’t climbed anything other than Tunnel for a couple weeks. The whole experience on Lady Mac was incredibly smooth, including the awkward scramble up the final stretch to the summit ridge (one of my least favourite bits of mountain, anywhere). I just stuck to solid rock ribs and was on the ridge in less time than I remember. No true summit for me today; the knife-edge ridge was way too gusty for my liking. The descent back down Lady Mac was as quick and streamlined as the climb, save for losing my phone for five minutes and spending another five talking to a local mountain-running dude.

Taking on Ha Ling was a labored effort. The jaunt across town wasn’t so bad; and while jogging up to Grassi Lakes and slogging through the climbing area, I was tired, but still game to take on the mountain. Once I started heading up Ha Ling, however, I felt the effort: my breathing and pulse were much higher than normal, my muscles burned, and I honestly thought I wouldn’t make it to the top. I kept telling myself I wouldn’t make it to the top as I continued to slog, passing people, and soon broke out of treeline and gained the col. No turning back now. I tagged the top, took some pictures, then rigidly stumbled back down the mountain. Running back to my car from the Ha Ling trailhead was a death march. I was probably slightly bonked but too stubborn to take my pack off and eat another boring bar. Glad I pulled off the true “Rim to Rim”. Also probably my single biggest vert day this year on the heels of a few weeks of little vert. 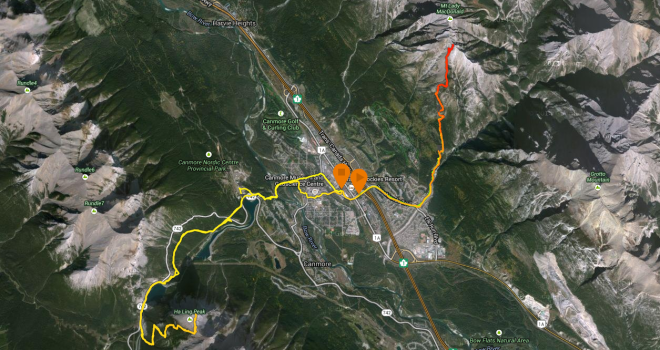